What are the new features of Magento 2 and what Magento 2’s latest version has to offer?

What are the new features of Magento 2 and what Magento 2’s latest version has to offer?

By Vishal Lakhani
|
|
Categories: Magento Commerce
|
Posted in
When it comes to e-commerce, none other than Magento 2 comes to the mind and why not as it has taken the ecommerce development to a completely whole new level with its magnificent abilities. The features of Magento has always surprised and now with its latest updates, the list of Magento 2's features have gone far to a great extent. And today, we are going to take a tour of it. 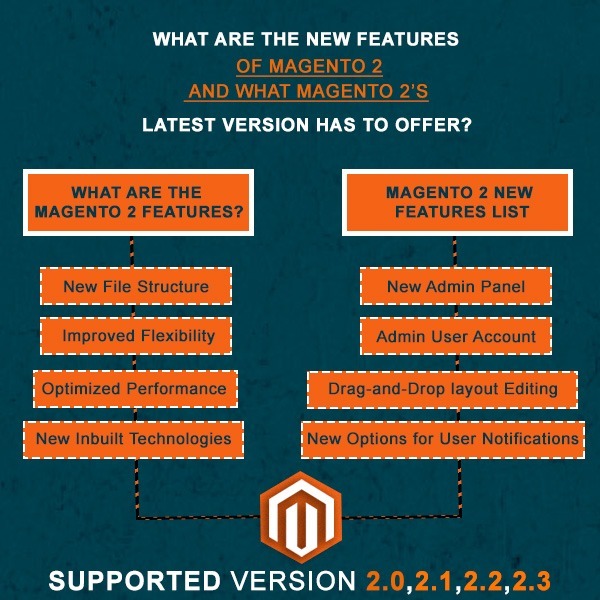 What are the Magento 2 features?

We already have enjoyed the new file structure, optimized performance, improved flexibility, jQuery library and the addition of new inbuilt technologies in Magento 2 and now, with the latest addition to the Magento family - Magento 2.3, the possibilities have increased further.

Now that you got a bit hold of Magento 2 feature list, let’s take a look at Magento 2’s latest version - 2.3

What exactly is Magento 2’s latest version and what’s new in it?

Magento 2.3 is no less than its previous version as it has got a lot more to offer. It surpasses its ancestors in terms of performance, security, and innovation. Magento 2's latest version has become even faster, safer and better. It has got numerous functional fixes, performance enhancements and quite a load of security updates. The following addition of features in Magento 2.3 will not only increase the performance level but will also lessen the burden on the server, thereby delivering resources faster than ever before.

It now supports the latest version of PHP 7.2 which guarantees higher security, better performance, and a lot of many new development features.

Its all new encryption and decryption will now be handled by the sodium library in it which will remove the PHP encryption module ‘mcrypt’ and migrate to Libsodium for password hashing.

With the introduction of GraphQL, including headless storefronts and PWAs, you will be able to get more refined data with fewer API requests.

The Asynchronous APIs in it will lessen the waiting period of the response to the request made by the client thus you will get quick responses.

Message Queue, which was only available to Magento commerce, is now there in Magento 2.3.0 which will ease the strain on the application band thus enhancing the performance of your Magento store.

One can save a lot of time, energy, and resources using Declarative Database Schema in it which allows developers to create, update and delete tables directly via XML.

Magento 2.3 now has the Two Factor Authentication feature in it which won't allow anyone to log in until the attempt is verified via SMS, Phone call, Access Token, or One Touch. Google Authenticator, Duo Security, Authy, U2F Devices (Yubikey and others)

Magento store owners can now have the security of Google reCAPTCHA on their Magento mobile app.

Magento 2.3's cache management ACL provides fine-grained admin control through which you assign access to view and delete your store caches and thus prevent any kind of accidental changes from affecting the performance of your Magento store.

PWA studio has been added into Magento 2.3. using which your developers can create reliable, fast, and engaging apps on the Magento platform that will run in offline mode, support data caching and increase your conversion rates.

Page Builder, an easy to use drag-and-drop visual content editing tool has been introduced for extra customisations. Plus, you can also get Third Party Content Integration, including the likes of YouTube, Vimeo Videos, Google Maps and much more done as well.

Elasticsearch support which was only available to Magento Commerce has been now extended to Magento Open Source with this latest update. It will power up your Magento site search capabilities, including faceted search (filtering by attributes).

If you are an online store owner and are still struggling with old versions of Magento 2, it's time to get updated. MageAnts have such a huge experience of Magento and Magento 2 you can hire Magento 2 developer from MageAnts for your development.

Magento Certified Developer Vishal is not just a dedicated developer but also a passionate blogger. He believes that a content with 10 meaningful and helpful words is a quality-rich content than randomly filling 1000 words. Apart from blogging and playing with Magento, he loves to read, travel and learn something new every day.

Subscribe us to get updates from MageAnts for magento Extension updated..

Recent Posts
How to Create Shipment using Magento 2 API?
What are the Latest SEO Trends For Ecommerce In 2022?
How to Get Attribute & Attribute Options in Magento 2 Programmatically?
The Ultimate Guide on Mobile Commerce
How To Setup Cron Time by System Configuration in Magento 2?
Categories
© 2016-2021 MageAnts. All Rights Reserved. Author